We’ve been more than lenient.

When famed Southern Chef Paula Deen was called “the most dangerous person in America” by fellow chef and travel writer Anthony Bourdain, we said, “so what?” and finished off a big plate of Paula’s fried butter balls. When she was criticized for promoting Smithfield Foods pork products while the company was in trouble for being a polluting, monopolistic anti-union harasser of its workers, we didn’t notice. We were chowing down on Paula’s ‘Better than Sex” pineapple coconut cake. 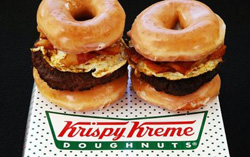 But when she released her new book, Paula Deen’s Southern Cooking Bible, she entered the realm of theology, and we felt we should examine the tome for any heretical teachings.

Be glad we did.

The first cardinal sin we discovered was theft. Her recipe for the grilled turkey sandwich known as the Kentucky Hot Brown was actually created at the Brown Hotel in Louisville, Ky., by Fred K. Schmidt in 1926. It’s not her idea at all. More lies appear elsewhere in the book. Example: Her recipe for baked brie with fig jam, which is obviously not a “food” item at all. Finally her bacon cheeseburger meatloaf recipe promiscuously mixes in unclean pork products clearly forbidden in Leviticus 11:7.

Lucky for us she failed to include alluring, lascivious images of her tasty treats, enticing the weak willed into temptation. Thank God!

Thomas Aquinas said it best: “Gluttony denotes, not any desire of eating and drinking, but an inordinate desire… leaving the order of reason, wherein the good of moral virtue consists.”

In short, Paul Deen’s “Bible” is little more than a festering plate of putrefying poached heresy, glazed over with a veneer of powdered sugar. If there is any justice in the universe she will be consigned to the hottest level of Dante’s stovetop and smothered in syrup for eternity.

Next week— A thorough examination of Rose Levy Beranbaum’s Pie and Pastry Bible.

(Editor’s Note: Skippy R. is our culinary and automotive reviewer. The opinions are his own)

Skippy R is retired after toiling as a scribe for a large denominational newspaper in Texas for about 40 years. He's written for The Wittenburg Door and Beliefnet. He lives in Dallas with his wife, Mrs. Skippy, and leads a Bible study in his home. Mostly spends time running after his grandkids. He is -- what are they calling it now? -- a Jesus follower.
View all posts by Skippy R →
This entry was posted in Review. Bookmark the permalink.
Share via
Facebook
Twitter
LinkedIn
Mix
Email
Print
Copy Link
Powered by Social Snap
Copy link
CopyCopied
Powered by Social Snap