FINDING CHRIST IN CULTURE DEPT.— Finding Christian allegory within popular culture is never so rewarding as when it is difficult. So my reward was great as I delved into a classic film that has dropped from popular consciousness today but was a hit in 1942– Reap The Wild Wind starring John Wayne, Ray Milland and Paulette Goddard. 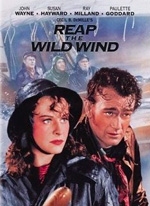 I was sure the incomparable Gospel message had to be hidden somewhere within this  improbable story that combines pirates in Key West during the 1840s, slavery, betrayal, a ventriloquist with a talking dog,  several shipwrecks, characters copied carte blanche from Gone With The Wind, a plot twist that turns on the invention of the safety match, and an attack by a clearly fake giant squid (The film won an Academy Award for Best Visual Effects).

The first thing that strikes the viewer is the fog. There’s lots of fog. And isn’t that a lot like life? The futility, the confusion, the inability to see where you’re going? Your life becomes a shipwreck, and then the salvagers arrive to pick you clean.  The chief pirate/salvager, “King Cutler,” is so obviously a type of Satan, the great deceiver, that we’re not surprised when his plan almost succeeds in destroying the love of the strong-willed Loxi Claiborne for both Capt. Jack Stuart and the aristocratic Steve Tolliver.

In fact, placing Capt. Jack in the Judas role, Loxi as the Bride/Church, and Steve (who almost dies, Christ-like, in the depths struggling with the Beastly Squid, yet rises again) as the Savior, I am only left, puzzled and musing, on the role of the talking dog. Mysterious are the ways of the Spirit, both in cinema and in life.

Skippy R is retired after toiling as a scribe for a large denominational newspaper in Texas for about 40 years. He's written for The Wittenburg Door and Beliefnet. He lives in Dallas with his wife, Mrs. Skippy, and leads a Bible study in his home. Mostly spends time running after his grandkids. He is -- what are they calling it now? -- a Jesus follower.
View all posts by Skippy R →
This entry was posted in Review and tagged culture, film. Bookmark the permalink.
Share via
Facebook
Twitter
LinkedIn
Mix
Email
Print
Copy Link
Powered by Social Snap
Copy link
CopyCopied
Powered by Social Snap