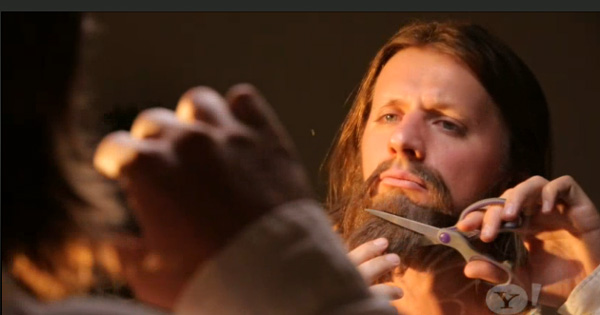 You may have seen this already. But if you’re familiar at all with the Jason Bourne film trilogy and New Testament theology, I think you’ll like this “Bourne Again” trailer.

Jesus, disguised and on the run, fights off opponents with bread and fishes, and is seemingly “everywhere” to those who are tracking him.

As the video closes, the narrator says: “Bourne Again — there was never just one.  Well, except for God. There’s just one God.  But I mean, it’s America, so believe what you want.”

See if you can catch the brief allusion to the “Footprints in the Sand” poem and painting.

Skippy R is retired after toiling as a scribe for a large denominational newspaper in Texas for about 40 years. He's written for The Wittenburg Door and Beliefnet. He lives in Dallas with his wife, Mrs. Skippy, and leads a Bible study in his home. Mostly spends time running after his grandkids. He is -- what are they calling it now? -- a Jesus follower.
View all posts by Skippy R →
This entry was posted in Review. Bookmark the permalink.
Share via
Facebook
Twitter
LinkedIn
Mix
Email
Print
Copy Link
Powered by Social Snap
Copy link
CopyCopied
Powered by Social Snap