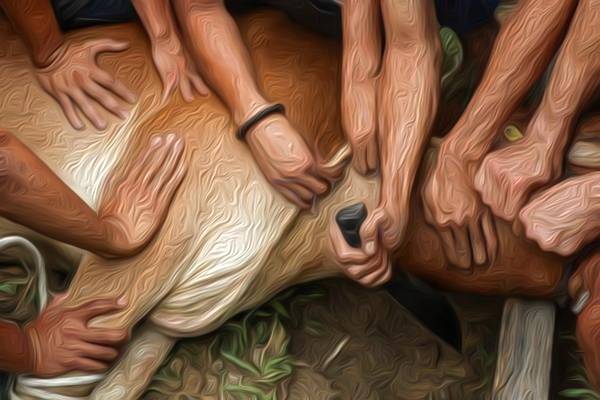 News of the deadly school shooting in Uvalde took me back to a tragedy of a different kind that I experienced up close.

When you have to clean your friend’s brains off his bedroom wall like I did after his suicide, it tends to focus the mind.

I asked myself at the time, was there something else that I could have done to prevent this? Did I show enough love and concern? I thought of a lot of things, and had a lot of regrets, but of course it was too late.

This happened decades ago. But I noticed back then – after driving my friend to numerous sessions with his psychiatrist – that the mental health facilities were swamped. They could only see him for maybe 10 or 15 minutes, mostly just to prescribe meds. The facilities were run down, and the general atmosphere was depressing. He was pretty much left on his own.

The reason was (and still is) because Texas ranks last in per capita mental health funding. In fact, this April the state slashed $211 million from the department that oversees mental health programs.

Sure, my friend, deceived by the voices in his head, pulled the trigger himself.

But was there something  government officials and our Legislature could have done to help prevent my friend’s death? Maybe pass bills to provide more mental health funding? No doubt.

This led me to other questions.

In August 2019, a young white supremacist drove from a Dallas suburb to El Paso and gunned down 23 people at a Walmart store, specifically targeting Hispanics. According to his manifesto posted online, the shooter was influenced by the “great replacement” conspiracy theory that says illegal immigrants were purposely being allowed to “invade” the U.S. to vote for Democrats and take power from whites. His trial was postponed because of Covid-19 delays, but it was reported that his attorneys would use an insanity defense.

The same “great replacement” conspiracy theory was cited by another white supremacist shooter earlier this year in Buffalo, this time targeting blacks.

Do public officials or media commentators bear responsibility when they echo and add strength to the same conspiracy theories that fuel racist violence?

Elected officials often appeal to a common “Judeo-Christian heritage” as the basis for many of their policy decisions.

An obscure passage in the Torah and the rabbinical commentary surrounding it should be studied before any politician “washes his hands” of responsibility for any of these tragedies.

Deuteronomy 21:1-9 outlines a procedure to respond to murders in the countryside where no witnesses are available and the killer is unknown. This is sort of the ancient Jewish version of “CSI Judea.” But the passage also says something important about the responsibilities of government officials and society in general.

After the discovery of the murder victim’s body, elders from the nearest town bring a sacrifice, but it is a strange one.

A young heifer that has not been used yet for farm work is brought to a “rough valley” outside the town  nearest to where the victim was found. The elders of the town then  “strike off the heifer’s neck” or, as the Hebrew term ārap̄ is usually translated according to the rabbinical scholar Rashi, “He breaks its neck with a hatchet [i.e., from the back].”

Then the elders from the town wash their hands over the heifer and say, “Our hands did not shed this blood, nor did our eyes see [this crime]. Be merciful, O LORD, unto thy people Israel, whom thou hast redeemed, and lay not innocent blood unto thy people of Israel’s charge. And the blood shall be forgiven them. So shalt thou put away the guilt of innocent blood from among you, when thou shalt do that which is right in the sight of the LORD.”

The heifer is a type of innocence itself – never yoked or worked, and slain in a valley never plowed or sown. Innocence had been cut down and slain, and this is re-enacted in the killing of the heifer.  It also is a stand-in for the community. The ritual basically is saying, “If we are responsible for this murder, may we be killed like this heifer.”

The rabbis argued over the meaning of this passage, but the bottom line was that the local authorities bore the blood-guiltiness for the murder until either the murderer was found or this ceremony removed their guilt.

A Targum commentary on this passage explains that the town itself is first suspected as being responsible for the murder.  They are “guilty until proven innocent.” And even after the ritual is completed and the blood-guiltiness is removed from the town leaders, there are still consequences.

The land surrounding the place of this sacrifice would be lost to the town for cultivation from then on, “that they might be the more careful of their countries and borders, and how they encouraged bloody minded men to dwell among them.”

This all seems strange to us.  How could they have been responsible? Rabbinical commentary posits several explanations.

The rabbis link the breaking of the neck of the heifer with Israel’s “stiff-necked” response to the worship of the Golden Calf in the wilderness (Exodus 32). Those who tried to distance themselves from the idolatry still did not speak out against it. They turned the “back of the neck” against it. In other words, they tried to ignore it.

Consequently, if a murder took place within their sphere of influence, town elders had to ask themselves several hard questions, according to the rabbis. Had they “turned the back of the neck” to any aspect of this crime?

First, they considered the victim.  Was this traveler’s needs ignored? Rashi explains: Did they not really “see him, and let him depart without food or escort [which would have indirectly caused his death, leaving this man to the elements and to robbers]”

Another aspect is brought out by the Jerusalem Talmud (Sotah 9:6, 23d). The elders’ declaration could also refer to the murderer, not only to the victim.

In other words, the elders must declare that they did not previously let such a murderer go, either through bribery or negligence, if he had been in their hands, without pursuing justice.

But an even broader responsibility is hidden within their declaration: “[It was not the case that] we sent him off without food, such that he had to become a highwayman [in order to eat] and thus he was killed.”

“He had to become a highwayman?” This is saying the actions or inactions of the town and its leaders might actually push someone toward a life of crime.

The “elders” here simply represent all Israelites who are responsible for the social welfare of the vulnerable. Whenever poverty causes a person’s death, the community bears some of the responsibility, according to the rabbis.

In the Talmud, this idea is expressed in the Aramaic phrase, “Kol yisrael arevim zeh bazeh”: All of Israel is responsible for one another.

Did the elders ignore the potential murderer’s dangerous tendencies, or possibly influence him toward his evil deed either by their lax justice or blindness to his needs? Or did they fail to fully “see” the future victim who came under their covering and care as a traveler?

You might even say they wondered if “society” was somehow responsible for this crime, either through lax enforcement of justice or inadequate charity and concern for strangers, travelers and the poor.

Even the infrastructure of the town and countryside is scrutinized, in case it might have added to the problem:

“The elders of the place call upon God as their witness, according to the interpretation of our Sages, that they have always kept the roads in good condition, have protected them, and have directed everyone that asked his way; that the person has not been killed because they were careless in these general provisions.” – Maimonides, Guide for the Perplexed III, Chapter 40

It’s not a stretch to see how this also spills over into those whose reputations are “murdered” through slander. Slander, the rabbis said, kills three – the slanderer, the one slandered, and those who hear the slander and pass it on. The current online political bile mixed with lies could be what Jesus spoke of when he said “whoever says to his brother, ‘Raca!’ [Idiot!] shall be in danger of the council.  But whoever says, ‘You fool!’ shall be in danger of hell fire” (Matthew 5:22).

Can rumor-mongering or a cavalier attitude toward the truth through spreading dangerous conspiracy theories – say, on social media – lead to destroying people’s lives, and even actual deaths?

Do I share responsibility for a white supremacist massacre if I pass on a fake-news rumor about a “great replacement” racist theory?

Maybe I’m making this too broad, but it’s something to think about.

Of course, in all these hundreds of mass shootings, we know who the actual perpetrators are.  But we face a situation where the causes of these mass shootings are not known.

And yes, sin is always the root cause, and “The heart is deceitful above all things, and desperately wicked” (Jeremiah 17:9).  But other countries with a similar number of deceitful hearts don’t seem to have this mass-shooting problem.

These are not questions from “woke” socialists. They reflect a part of our Judeo-Christian heritage. Pious scholars have pondered and argued over them for several thousand years. Only after considering these kinds of questions can we or our public officials “wash our hands” of the guilt.

As a society we cannot just throw up our hands. To accuse each other is also futile. We are all guilty until the cause is found.

Ultimately, the broken-neck heifer atonement ritual was abandoned during the Second Temple period, because, the rabbis confessed, there were just too many unsolved murders to deal with.

Have we reached that point in our society? I hope not.