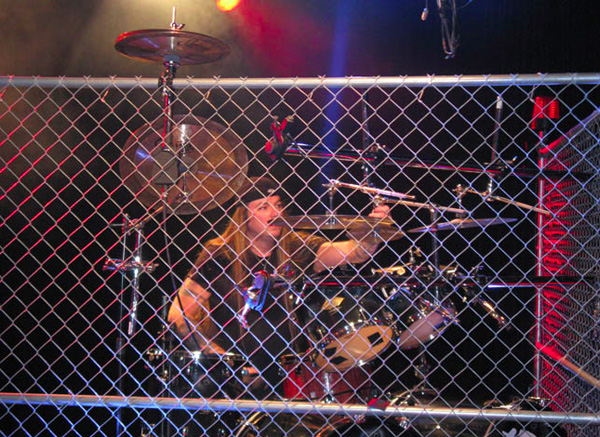 Bradlee Dean is the founder and executive director of the non-profit teen ministry with the inordinately long name You Can Run But You Cannot Hide International. He hosts a nationally syndicated radio show, The Sons of Liberty. He produced a documentary, My War, to “give understanding and clarity of who our Founders were and their true intentions when they established this Judeo-Christian nation.”  He’s the drummer for the band Junkyard Prophet,  which plays hard, funky, loud, and fast Christian rapcore-nu metal music. Wikipedia tells us that Heaven’s Metal, a Christian heavy metal magazine, named Junkyard Prophet the second best unsigned band in the 1990s. Michele Bachmann was sprayed with glitter in Minnesota by a gay-rights activist who was upset with Bachmann’s support for Dean and his ministry. On the other hand, Dean has been quoted as describing former President George W. Bush as a “punk, lyin’ stinkin’ kid,” while maintaining former Vice-President Dick Cheney is a “straight-up liar” who “will be in Hell pretty soon.”
So, are we surprised that the group performs behind a chain-link protective fence (above) reminiscent  of the “Rawhide” scene from the Blues Brothers movie? In this instance, form follows function, and no one can criticize that kind of style.

Skippy R is retired after toiling as a scribe for a large denominational newspaper in Texas for about 40 years. He's written for The Wittenburg Door and Beliefnet. He lives in Dallas with his wife, Mrs. Skippy, and leads a Bible study in his home. Mostly spends time running after his grandkids. He is -- what are they calling it now? -- a Jesus follower.
View all posts by Skippy R →
This entry was posted in Music and tagged Bachmann, Bradley Dean. Bookmark the permalink.
Share via
Facebook
Twitter
LinkedIn
Mix
Email
Print
Copy Link
Powered by Social Snap
Copy link
CopyCopied
Powered by Social Snap