Well, you all know Clint Eastwood refused my offer to become my Vice Presidential nominee, but at least now he’s surprising everybody by coming to Tampa to speak on my behalf. Yay! 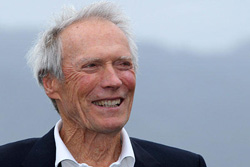 A lot of people didn’t know who the “mystery speaker” was going to be. I didn’t either, until one of the Koch brothers let it slip this morning over breakfast.

A lot of people were tweeting and commenting that Ronald Reagan might even appear as a hologram on stage, sort of like when they put a digital John Wayne into those TV ads. My, that would have been something! The technical things they do these days. . .  Anyway, I was kind of shocked when Clint suggested that after his speech, I appear at the podium not in person, but as a hologram. He said it would help me better connect with the people at home.

Does he mean a virtual me is warmer than the real thing? Am I to be a mere Zelig-like add-on at my own convention? I told him no, I was gonna stand out there in both of my dimensions and let people see the real, interactive, high-definition me that I am.

He did give me some good advice, though, something he’s been quoted as saying before: “My old drama coach used to say, ‘Don’t just do something, stand there.’ Gary Cooper wasn’t afraid to do nothing.”

And I’m planning to throw everything I have behind that sentiment tonight. We can do better! Just watch me, Clint.