In past election years, conservative evangelicals have wisely gone beyond positions, platforms, policy papers, competence and character in evaluating a presidential candidate.

Some have scrutinized their candidate’s favorite scriptures for insight into their souls. Others have simply opened their Bibles randomly, pointed to a verse and tried to find a clue.

But in the end, they all come to me.

With my trusty Beastie machine, I have a proven track record of discernment in determining whether your favorite political candidate is actually in league with the devil.

Combining ancient mysticism with modern technological whiz-bang, my Beastie machine has a 97% record over more than a decade in finding hidden evidence that a person – whether politician, celebrity or both – has a name that adds up to 666, the number of the Beast in the Book of Revelation. 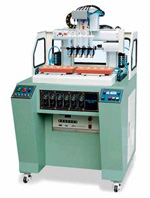 Regrettably, Beastie has contracted a digital version of the Coronavirus, an especially severe malware called Covid-1984. He is currently quarantined in a double-locked closet. With the 2020 Presidential Election only weeks away, I am testing out a new method I’ve been working on: Godly, Biblical Names.

This method has been somewhat popular in the past. In 2016, there was quite a stir when I pointed out that in Aramaic, the initial letters of each verse of the Lord’s Prayer almost spelled out T-H-E-D-O-N-A-L-D. But this occurred too late to have much impact on voters.

“Barak,” which means “shining” in Hebrew, worked well for Obama in 2012. In contrast, the name of his opponent, “Mitt,” simply had no liminal resonance.

So let’s examine the names “Joe Biden” and “Donald Trump.”

Donald Trump initially seems like a good bet. He’s a billionaire and leader of the free world, so God is obviously blessing him. He’s no stranger to the spiritual. Radio talk show hosts have compared him to “the King of Israel” and “like the second coming of God.” He famously held a Bible upside down for a photo-op in Lafayette Square. When asked which he liked better, the Old or New Testament, Trump has said, “Probably equal.” He explained, “The Bible means a lot to me, but I don’t want to get into specifics.”

Some evangelicals have also compared Trump to the Persian king Cyrus, an early human rights advocate who decreed freedom for the Jews.

The name “Donald” in fact comes from the proto-Celtic “Dumno-ualos,” meaning “world ruler.” (If we’re looking for links to the Beast, this might trouble us). On the other hand, “ruler” in Hebrew is “moshel,” and is used to refer to the Messiah in Micah 5:2.

But taking a harder look at the name “Donald,” I could find little else to recommend it. No Israelite kings, patriarchs or prophets (or even any eunuchs) are named “Donald.” Donald is definitely not a Godly, Biblical Name.

“Joseph” on the other hand, has deep biblical roots.

The biblical Joseph is an Old Testament hero, and Joe Biden is blessed to have this patriarch as his namesake. Considered as an impractical “dreamer,” Joseph was despised by his brothers for his coat of many colors. Only a liberal dreamer would wear a rainbow-colored jacket, and that’s exactly who Biden is. 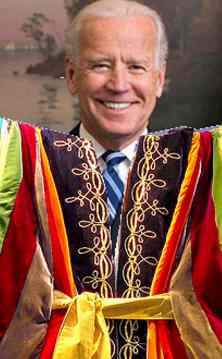 Like Biden, Joseph waited years to rise to his greatest position of authority. Joseph was put in charge of Egypt when it was facing a dire crisis. Luckily there would be seven years of plenty before the seven lean years arrived. Joseph heavily taxed the people and filled up Egypt’s granaries in preparation for the coming economic recession, much like a tax-and-spend Democratic administration would do.

So far, Biden has the edge.

But if we factor in vice-presidential candidates, the balance changes.

Trump’s running mate “Michael” Pence has the name of a mighty biblical archangel. Michael figures prominently in the Book of Daniel, and the archangel leads God’s armies against Satan’s forces in the Book of Revelation.

What about Kamala Harris, Biden’s VP candidate? She is of Jamaican-Indian heritage, and her first name means “lotus” in Hindi. A pleasant enough appellation, but with no biblical connections. Harris is a Baptist. But troublingly for evangelicals, “Kamala” is also another name of the Hindu goddess Lakshmi.

Taken together, this means it would be “easier for a Kamala to go through the eye of a needle” than for Biden/Harris to counter Trump/Pence in the Godly, Biblical Name category.

(And to muddy the waters even more – the anonymous conspiracy theorist “Q” has a name based on the Hebrew letter Qof, the shape of which depicts… the eye of a needle. Hmm. More on this later).

Anyway, name-wise it’s a toss up, really. And with Beastie still in lockdown, there’s no way I can give a definitive prediction on the 2020 presidential vote.

But, to quote someone who no doubt DOES have a godly, biblical name: “Failure is not fatal: it is the courage to continue that counts.”

Skippy R is retired after toiling as a scribe for a large denominational newspaper in Texas for about 40 years. He's written for The Wittenburg Door and Beliefnet. He lives in Dallas with his wife, Mrs. Skippy, and leads a Bible study in his home. Mostly spends time running after his grandkids. He is -- what are they calling it now? -- a Jesus follower.
View all posts by Skippy R →
This entry was posted in Weekly Beastie. Bookmark the permalink.
Share via
Facebook
Twitter
LinkedIn
Mix
Email
Print
Copy Link
Powered by Social Snap
Copy link
CopyCopied
Powered by Social Snap