First there were Black Pride and Gay Pride parades, and now even Atheist Pride Parades are becoming popular around the country. This disturbed Rev. Hosea Rileston of Fort Worth, Texas, who has started a movement of his own — Christian Humility Parades. 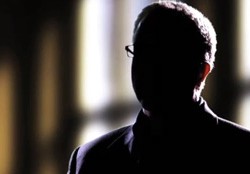 Already several Christian Humility Parades have been sponsored in Dallas, Cleveland, Orlando and even Las Vegas. But there’s a twist. Pride is not involved.

“Because parades and other such frivolous activities are contrary to the sober and serious admonitions of the scriptures,” he said, “true humble Christians should show solidarity with these parades by staying at home to pray and only showing up ‘in spirit.'”

By their virtual presence, or actual non-presence, they show their Christian witness without flaunting it in the prideful manner of other political and ideological movements, he explained.

The self-effacing Rev. Rileston, who agreed to a Skype interview only with the video camera image obscured, explained that turnout has been tremendous at these rallies and parades. He said up to 100,000 men, women and even little children  participated virtually in the February 23 parade through downtown Pittsburgh, “and that was in the middle of a raging snowstorm!”

Virtual parade attendance has the added benefit of lowering security costs and other municipal expenses attendant to a traditional parade or demonstration. It’s ecologically sensitive, and it also makes it difficult for crowds of counter-demonstrators to find and harass the participants.

“It’s a way of putting our humility in the spotlight,” he added. “Whenever Christians find an opportunity to testify for the faith without risk or even effort, we should take it.”

Skippy R is retired after toiling as a scribe for a large denominational newspaper in Texas for about 40 years. He's written for The Wittenburg Door and Beliefnet. He lives in Dallas with his wife, Mrs. Skippy, and leads a Bible study in his home. Mostly spends time running after his grandkids. He is -- what are they calling it now? -- a Jesus follower.
View all posts by Skippy R →
This entry was posted in News, Uncategorized and tagged humility, parades. Bookmark the permalink.
Share via
Facebook
Twitter
LinkedIn
Mix
Email
Print
Copy Link
Powered by Social Snap
Copy link
CopyCopied
Powered by Social Snap