Ugly Band of the Week: Newworldson 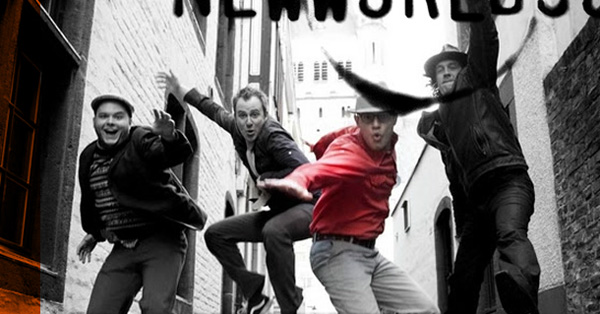 Newworldson plays “speakeasy gospel” music. That’s the band in the photo above. Apparently they just left the speakeasy and are a little “high” floating above the alley. I like the hats, and the look is clean. But there’s one thing I hate about current gospel music style. The “celebrity” member, usually the lead singer, gets all the coolest clothes. For instance, you see he gets to wear a red shirt while all the other band members are forced to wear dingy grey clothes that sort of blend into the background.  That’s just wrong.  Matching jump suits would be more egalitarian. The bio on their website says, “When Newworldson burst on to the scene in 2007, they might as well have ridden into Jerusalem on the back of a donkey.” So I guess the guy in the red shirt is a Jesus-type messianic figure.  Maybe he wrote these incomprehensible lyrics to their song, O Lament:

Yes, I’d say run as quickly as you can from these speakeasy gospel guys and their rigid fashion hierarchy.

[Editor’s Note: Our ‘Ugly Christian Band of the Week’ feature reviews the most important aspect of any Gospel/Christian music group—its fashion & style.]

Skippy R is retired after toiling as a scribe for a large denominational newspaper in Texas for about 40 years. He's written for The Wittenburg Door and Beliefnet. He lives in Dallas with his wife, Mrs. Skippy, and leads a Bible study in his home. Mostly spends time running after his grandkids. He is -- what are they calling it now? -- a Jesus follower.
View all posts by Skippy R →
This entry was posted in Music, Review and tagged music, Newworldson. Bookmark the permalink.
Share via
Facebook
Twitter
LinkedIn
Mix
Email
Print
Copy Link
Powered by Social Snap
Copy link
CopyCopied
Powered by Social Snap