Facebook announced it will “thoughtfully and slowly” begin rolling out ads that appear right inside your mind while you post on your newsfeed. 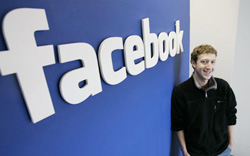 “We don’t want to be intrusive,” Facebook founder Mark Zuckerberg said. “And all privacy rights will be preserved. Your thoughts will stay right where they usually are, like always. We’ll just be adding some more in.”

A mind is a terrible thing to waste, Zuckerberg continued. “Most people don’t take advantage of 76 per cent of their brain’s capacity, anyway. We’ll put it to good use.”

Facebook promises the new “mind ads” will not encroach on or slow down other mental processes, nor will they hinder driving. A text-only ad feature can be chosen in Facebook’s settings area. An opt-out feature may be added in coming weeks, but may not be available in all areas.

Skippy R is retired after toiling as a scribe for a large denominational newspaper in Texas for about 40 years. He's written for The Wittenburg Door and Beliefnet. He lives in Dallas with his wife, Mrs. Skippy, and leads a Bible study in his home. Mostly spends time running after his grandkids. He is -- what are they calling it now? -- a Jesus follower.
View all posts by Skippy R →
This entry was posted in News and tagged Facebook, privacy, Zuckerberg. Bookmark the permalink.