America needs to get its priorities straight!

Deep into this political season, candidates are slinging “racist” and “liar” around like out-of-control Agri-Fab fertilizer spreaders.

But now they’ve gone too far and are treading upon one of my precious pet peeves.

The Trumpizers have taken away my Eco-Friendly parking spot at Whole Foods!

It happened just this morning. I drove a mile up the road to our neighborhood Whole Foods to buy a couple of loaves of Seeduction whole-wheat bread and a package of beef bacon (in support of ’Save the Feral Hogs’ Week), expecting to slide my Prius snugly into the Eco-Friendly parking spot that Whole Foods politely reserves for liberals. 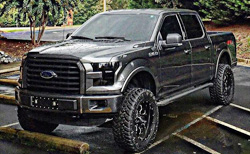 Instead, a menacing black Ford 150 pickup with a dirt bike strapped into the bed was sitting in my spot, filling it completely. It was sneering at me, mocking me, without apology.

It was a clever act of political hardball, which I took a few seconds to admire. But then I was forced to either park in the “Pregnant Moms” parking slot – which after a soul-searching moment of reflection I declined to do – or scour the lot for another space, further away, eating up precious fossil fuels and increasing my carbon footprint to a size 13.

Forced to walk several dozen feet back to the storefront doors, I gathered my items, working over in my mind how to get back at this guy. Or was it a mom… with three kids just trying to get her brood into the store without incident? Maybe I should cut this person some slack instead of being his judge, jury and executioner.

But then I saw him in the express checkout line. A 20-something, he had those black race-car sunglasses, a floppy hat and a t-shirt with something about Clinton on the front. Was this a Clinton supporter? What an ironic betrayal of worldwide human rights parking values!

I didn’t see him leave. I had forgotten my grocery bag, so – not wanting to use up a paper bag that might eliminate a tree somewhere – I was juggling my items and my cup of coffee all the way across the parking lot. But when I pulled away from my remote, run-of-the-mill parking slot and slowly drove past the black truck, there he was. He walked up and hoisted a case of water into the cab, obviously planning to guzzle it while dirt-biking ugly ruts into the pristine American wilderness somewhere.

And I saw his t-shirt full-on: “Hillary for Prison.”

Now, I have been having some recurring, troubling urges toward Trump for a while, I admit. Not proud of it. And I agree that at least a “scared-straight” overnight stay in one of our clean, federal correctional facilities would do anyone good, if only to regain a respect for our precious personal liberties.

But at that moment, the whole political jigsaw puzzle came together, and I had a vision of a Trump America with no more Eco-Friendly parking spaces for anyone.

And that cannot stand, my friends!

The bleak season of Democrats struggling to match the fervor of Trump supporters is finally over.

If they want my hybrid parking spot, they’s have to pry the Prius steering wheel from my cold, dead fingers.

Skippy R is retired after toiling as a scribe for a large denominational newspaper in Texas for about 40 years. He's written for The Wittenburg Door and Beliefnet. He lives in Dallas with his wife, Mrs. Skippy, and leads a Bible study in his home. Mostly spends time running after his grandkids. He is -- what are they calling it now? -- a Jesus follower.
View all posts by Skippy R →
This entry was posted in 1stWorldProblems, News. Bookmark the permalink.
Share via
Facebook
Twitter
LinkedIn
Mix
Email
Print
Copy Link
Powered by Social Snap
Copy link
CopyCopied
Powered by Social Snap