The Apotheosis of The Donald & The Ronald 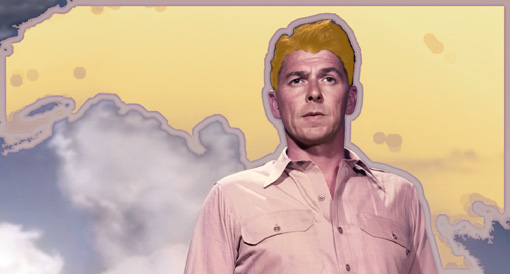 [Note: This was obviously written in the Alternate Reality that existed before Election Night. Just flip everything, and it can still be entertaining].

And I was in the Spirit on election day.

In the Spirit, by the way, not ‘spirits.’ Believe me, I don’t drink alcohol, not even my own Trump Vodka, so I was perfectly lucid and aware at the time. But I knew this was going to be a huge, HUGE Revelation! 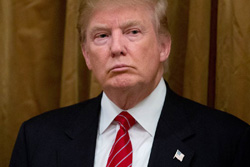 Anyway, I turned to see the voice that spake with me. And in the midst I saw one like unto The Ronald, clothed with a western-style garment down to the foot, and girt about the paps with a golden girdle. But The Ronald’s head and his hairs were of an orange hue, like unto my own; and his eyes were as a flame of fire.

And he laid his right hand upon me, saying unto me, “Thou hast made the Red States to tremble; thou hast rent it: Heal the breaches thereof.”

“Rent? I haven’t been into rentals for years,” I said, “I buy and sell at a huge profit now.”

“Silence!” The Ronald replied, and turned to one of his angelic minions.

“Unto the Angel of the Precincts of Florida, I say: ‘I have heard of thy hatred of the island tyrant and of thy hispanic-ness, and thy love of Republicans, and yet The Donald hast caused thee to scatter thy support among Rubios and Bushes and even among others not of my bosom, until thy strength has become weak as water there.’

“So, to the Donald I now say, ‘Since you have rejected my 2013 post-mortem autopsy plan to employ inclusive demographics, reaching out to Latinos, the disadvantaged and millennials, and have instead rebelled, and have put your trust in oppression and guile, and have relied on them, this sin will become for you like a high wall, cracked and bulging, that collapses suddenly, in an instant.’” 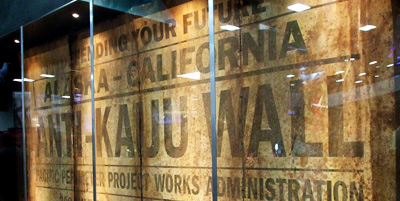 But he cut me off.

“Mexico shall NOT pay for it,” said The Ronald, his eyes aflame. “Neither shall pork-barrel funding, nor even sore taxation upon the land. Besides, hast though not seen ‘Pacific Rim,’ wherein such a wall was easily breached by the monstrous Kaiju?”

I’ve had just about enough of this, I said to myself.

“You know what? This is just a RIGGED SYSTEM you’re running here! And, it’s not classy. Not classy at all. I expected more from you, Ronny.”

At that moment a wonder appeared in heaven, a huge blue dragon with seven heads, ten horns, and seven presidential seals on its heads. Profiting from its persistent ground game, the blue dragon’s tail swept a third of the red states from CNN’s oversized Multi-Touch Magic Collaboration Wall.”

“Hold!” said the booming voice of The Ronald.

There was silence in heaven for the space of a half hour, which literally drove me crazy.

Hmm, maybe this is the moment I’ve been waiting for, I thought.

“O’ great Ronald,” I implored, “wilt thou now show me the judgment of the Great Whore, the Miss Piggy, pant-suited abomination who hath made the world woozy with the leaked revelations of her illegal e-mail servers? And then, shall we hurl the BEAST of OBAMACARE into the bottomless pit, wherein there is wailing and gnashing of teeth?”

The Ronald shook his head.

“Nay, thou scullion! Thy tongue out-venoms all the worms of the Nile. If thou wouldst cease tweeting, thou wouldst get the gist of where all this is going.”

Just then, I beheld a glistening, white city descend from heaven, settling painfully on my big toe in the process.

“This is the New Party,” the Ronald explained, “built on the foundation of a new set of donors, a few key primary rules changes and possibly a system of super delegates. And after extreme vetting, no rabble rousers, aryan-nation conspiracy theorists, Tea Party cranks, crackpots, racists, bigots, deplorables or haters shall enter therein.

“And now we shall all sit down for the ‘Retirement Dinner of the Donald,’ except thou art not invited to attend. In fact, thou art DISMISSED!”

And with that, I found myself flung as one dead, prostrate outside the gates of the righteous city.

“Bunch of low-energy buffoons!” I muttered, dusting off my jacket.

Glad this was all just a dream. I’ve got a shrewd business deal I want to pitch to Mark Cuban.