We should know by now not to anticipate ANYTHING Pat Robertson might do. I guess we’ll never learn. 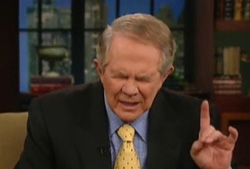 On April 24 we humorously suggested that the televangelist had charged that the East Coast earthquake was the result of “quantitative easing” by the Fed.  Sure enough, the same day we posted that, Robertson said on The 700 Club that the natural disaster “means that we’re closer to the coming of the Lord.” He preceded his statement with an unprecedented disclaimer : “I don’t want to get weird on this, so please take it for what it’s worth.”  Now, that’s a REAL sign of the End Times.