Editor’s Note: Gov. Perry is our guest devotional writer.
First, let me confess that I did make an unfair remark about Federal Reserve Chairman Ben Bernanke. 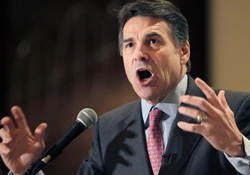 I said any more emergency efforts by Ben Bernanke to resuscitate the economy would be “almost treasonous.”  What I meant was that without trusting in Jesus to solve our problems, we might as well chuck it all anyway. Sure, I understand that Bernanke is trying to do his best. That’s one of the many things I appreciate about the Jewish people. I just wish we’d all wait for the capitalist process to kick in.  I promise you, if we watch that rotting mass of decaying, failed economy long enough, it will pull itself up by its bootstraps. Sort of like the God-blessed process of spontaneous generation. Think about it.