Focal Passage: Proverbs 24:10 – “If you faint in the day of adversity, your strength is small.”

As a first-time devotional writer but long-time fan, I’m honored to be asked to deliver these devotional moments for Blind Folly. (But, please, let’s not call it a “submission,” considering that word’s intimation of surrender, subservience and humility). 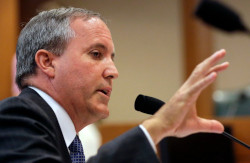 My topic this morning is adversity. And I’ve encountered it up close and personal.

Most recently, my baseless claims of voter fraud in the 2020 election were not even considered by the Supreme Court! All I asked was for the states of Georgia, Michigan, Pennsylvania and Wisconsin to not count “unlawful and constitutionally tainted votes” because it offended us Texans. I didn’t think I’d have to provide any actual evidence – none of those other voting fraud lawsuits had any.

Ballot integrity – that’s our main focus here in Texas. (That, and gerrymandering). But you can’t have “integrity” without “grit.” Because otherwise it’s just “inte__y.” And notice there’s no “we” in “adversity.” When it happens, I’ve found, it’s every man for himself.  “Where We Go One We Go All” goes out the window.

You might ask what got me through that difficult time?

It was knowing that those lawsuits took media focus off of the investigation of my bribery and abuse of office. People claim I used my office in a way that appeared to benefit Austin real estate magnate Nate Paul. Nonsense! I would have helped him as a simple citizen in need, even if he hadn’t donated $25,000 to my reelection campaign.

So I resolved not to “faint in the day of adversity,” and lawyered up. And as a sovereign citizen, you can too.

Let us pray: “Lord, thank you for the strength to scramble out of the thorny thicket of adversity – scratched and bleeding, but with an eye on the prize – and if I can’t do it without getting caught, at least let me do it all without fainting. Amen.”