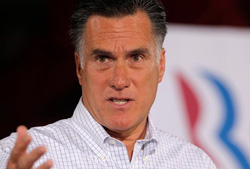 Condi, Condi, Condi. Why couldn’t you just give it a shot, take a chance, step up for America. Now I’ll have to choose between three drab Tea Party white guys. But how to discern the good, the bad and the ugly?

I’ve already got the boring white vote locked up. Darn it, my vice presidential choice should be a window into my soul, an expression of my vision for America.  He/She needs to have some panache, some charisma, i.e — be everything I’m not.

Let’s see. Sen. Marco Rubio has some relatives who are Mormon, so he’s a fit there. He was a former Scientologist, and they’re in the news lately. That’s kind of exotic. He’s from Florida, an important swing state. He’s Hispanic, a Cuban immigrant, so he’ll play well on Telemundo … if not in Arizona.

Wisconsin Rep. Paul Ryan is an intellectual. He has a bold budget plan. (I just don’t want another Sarah Palin, you know?) But he may be smarter than me. Hmm.

I’m actually leaning toward New Jersey Gov. Chris Christie. Not because I like him, but because he’s just so much more substantial to lean on. Some people have gravitas, but he has an actual gravitational pull. Better still, he’s approaching the shape of a perfect sphere — much like one of Plato’s Forms, which exist outside of time and space. Once he gets rolling nothing could stop him. Simple momentum is in his favor.

Of course, I’ve already eliminated Louisiana Gov. Ahmed-Jindal-jab. As if I’m really gonna have a guy from India who looks like an Arab on my ticket.

This is a tough choice. I’m tempted to spring a surprise on everybody, even on my advisors.

Next: Clint Eastwood makes my day.